A deeper look into what's behind the Bubbles.

LLS pioneered the Prosecco category in 1984 with the introduction of Zardetto, the first Prosecco on the US Market.

Today, Prosecco is a bubbling category, growing double digits year over year, and is a favorite sparkling choice among buyers and consumers across the country. Similar to the Champagne category, the Prosecco category can be segmented into three producer types: Cantina Sociale/ Cooperative, Négociant/ Bottler and Grower/ Producer. To reflect this structure, LLS has rounded out its portfolio to provide the US market with the best Proseccos of the region showcasing the true representation of the region’s diversity.

The Prosecco region is divided into 5 tiers of quality distinguished by vineyard sites, yields and methods of production.
VALDOBBIADENE SUPERIORE DI CARTIZZE DOCG
Cartizze is a subzone of the steepest hillsides within the commune of Valdobbiadene, covering just 107 hectares. This pentagon shaped region has the perfect combination of a mild climate along with ancient moranic, sandstone and clay soils, giving the wines complexity and elegance. The maximum grape yield is 12 tons per hectare, the smallest in the region.
VALDOBBIADENE CONEGLIANO PROSECCO SUPERIORE RIVE DOCG
“Rive,” in local dialect, means the slopes of the steep hills that are characteristic of the zone.
These wines are produced from single vineyards with high-quality terroirs, and express the
distinctive combination of soil, exposure and microclimate. Within the denomination there are 43 Rive, with smaller yields per hectare, grapes are exclusively hand picked and the vintage is always shown on the label.
VALDOBBIADENE CONEGLIANO SUPERIORE DOCG
A historical wine growing region since Roman times that was first outlined in 1930s. Sixteen years later, the “Brotherhood of Prosecco” was founded and in 1962, 11 producers formed the Consortium for the Protection of Prosecco from Conegliano and Valdobbiadene. In 1969, DOC status was granted to the Prosecco produced in the 15 communes between Conegliano and Valdobbiadene followed by DOCG status in 2009.
PROSECCO DOC TREVISO
Subzone of the Prosecco DOC area, outlining the traditional production zone for light,  fruity, sparkling wines made from the Glera grape.
PROSECCO DOC
Established as a protected geographic origin in 2009, this region located in the Northeast encompasses 5 Veneto provinces (Treviso, Venice, Vicenza, Padua, Belluno) and 4 provinces in Friuli Venezia Giulia (Gorizia, Pordenone, Trieste and Udine). 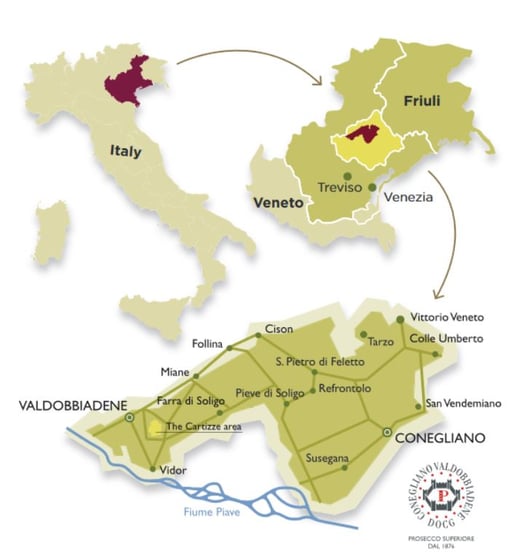 The DOCG is set between the two historical towns of Prosecco, Valdobbiadene and Conegliano.

Similar to the Champagne category, producers of Prosecco can be segmented into three broad categories of producer types.

GROWER/PRODUCER
Similar to the Récoltant-Manipulants (RM) of Champagne – these are the families that have owned and farmed the same small plots for generations. Grower/Producers own and manage the vineyards and they harvest their own grapes. Their wines are distinctive, reflective of terroir, and often show climatic nuances from vintage to vintage. Typically, production quantities are small.
NÉGOCIANT/BOTTLER
Similar to the Négociant-Manipulants (NM) of Champagne. Négociant/Bottlers buy their grapes from select grape growers throughout the region with whom they have long standing relationships. They focus on blending grapes from different regions and sometimes vintages to produce a consistent taste and product every year.
CANTINA SOCIALE/COOPERATIVE
Similar to the Coopératives de Manipulation (CM) of Champagne. Growers supply the cooperative with grapes which are the bottled under a private label or as a large co-op brand. Some of the biggest brands are second level cooperatives or a co-op of cooperatives. 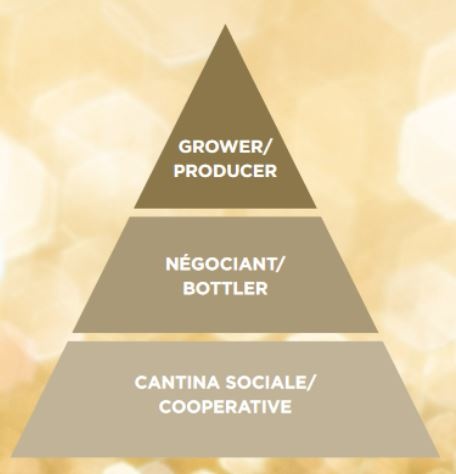